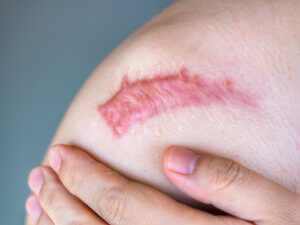 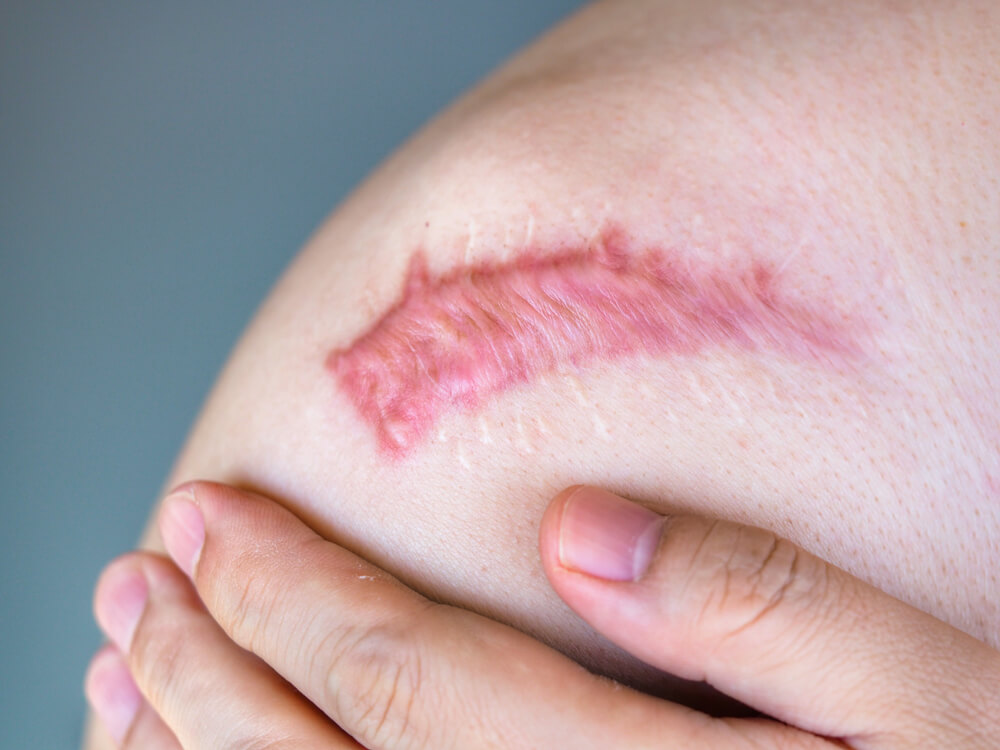 The injections cause keloids to soften and become flatter to reduce their appearance. Multiple injections may be required to restore a smooth and even texture to the skin.

Scar Reduction Injections can also be used for:

Scars can appear anywhere on the body that has experienced skin breaking. They may look red, pink or purple and have a raised texture.The healing process forms scars after trauma to the skin. The skin may be broken due to an accident or injury, or surgical intervention. When the skin is injured, fibrous scar tissue builds up [...]
Scarring Symptoms
The symptoms of scarring can be a build-up of scar tissue which can be red or purple and have a texture which may feel like a lump. Some scars may become flat over time. [...]
FIND OUT MORE

What does the treatment involve?

Treatment is quick and involves the administration of the steroid solution to be injected via a small needle directly to the keloid or hypertrophic scar. Relatively painless, this treatment is only administered by a doctor.

How many treatments do I need?

Depending on your scar, as hypertrophic scars and keloids vary in size, you may need multiple steroid treatments to reduce your the size and appearance of your scar. Your doctor will determine the amount of treatments you will need after assessing you scar during your consultation.

How quickly will I see results?

You will notice results from your steroid scar reduction injections after your first treatment. Your scar will appear smaller.

One of the first cosmetic clinics in the UK

"I have had  fantastic advice and service from the staff at Bodyvie. After my initial consultation I felt really hopefully about my options and I am really starting to see results from my treatments. I would highly recommend the clinic to anyone."
Michaela Jennings

Reduce the Appearance of Scars

A Longer Lasting Facial Lift
SHOW MORE
BACK TO TOP

Designed by Digital Aesthetics
We use cookies on our website to give you the most relevant experience by remembering your preferences and repeat visits. By clicking “Accept All”, you consent to the use of ALL the cookies. However, you may visit "Cookie Settings" to provide a controlled consent.
Cookie SettingsAccept All
Manage consent

This website uses cookies to improve your experience while you navigate through the website. Out of these, the cookies that are categorized as necessary are stored on your browser as they are essential for the working of basic functionalities of the website. We also use third-party cookies that help us analyze and understand how you use this website. These cookies will be stored in your browser only with your consent. You also have the option to opt-out of these cookies. But opting out of some of these cookies may affect your browsing experience.
Necessary Always Enabled
Necessary cookies are absolutely essential for the website to function properly. These cookies ensure basic functionalities and security features of the website, anonymously.
Functional
Functional cookies help to perform certain functionalities like sharing the content of the website on social media platforms, collect feedbacks, and other third-party features.
Performance
Performance cookies are used to understand and analyze the key performance indexes of the website which helps in delivering a better user experience for the visitors.
Analytics
Analytical cookies are used to understand how visitors interact with the website. These cookies help provide information on metrics the number of visitors, bounce rate, traffic source, etc.
Advertisement
Advertisement cookies are used to provide visitors with relevant ads and marketing campaigns. These cookies track visitors across websites and collect information to provide customized ads.
Others
Other uncategorized cookies are those that are being analyzed and have not been classified into a category as yet.
SAVE & ACCEPT